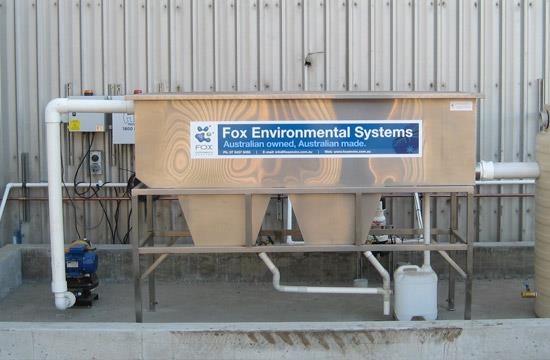 Dennis from Chalmers Transport rang and expressed his personal gratitude regarding the overall management of the project, “Graham from Little Holland has done a very good job here” said Dennis.

The total time lost was limited to the hours taken in relocation of the wash equipment.

This is a sound outcome for the client, contractors, Water Authority, AQIS, Little Holland and Fox Environmental Systems.

Chalmers Transport was given short notice of nil renewal of their existing lease, they were expecting to lose considerable time and business as a result of the leaser’s decision. Chalmers Transport contacted Fox Environmental Systems with a view to relocating their current wash bay to their new site location. Fox made immediate contact with their Victorian Distributor Little Holland Pty Ltd, and they went straight to work.

Little Holland’s Engineering/ Project Manager Graham Little, gave the project the required priority and provided a concept and budget costing for the new roofed wash bay & AQIS Treatment System. The plan was accepted by the client.

Hydraulics drawings were prepared and submitted to City West Water and AQIS and subsequently gained approval.

A Fully Automatic, Fox Environmental Systems AQIS Treatment System.
Contractors commenced site works, with Graham involved in the supervision of the installation of the waste water treatment component of the works. Fox provided the equipment package which was installed by the site plumbing and electrical contractors and commissioned by Little Holland’s Engineering team.

The new wash bay was designed, constructed, installed and commissioned by Little Holland in a matter of weeks.

Sales & Service Second to None

Are you ready to get started with Fox Environmental Systems? We have a huge range of suppliers across the globe.